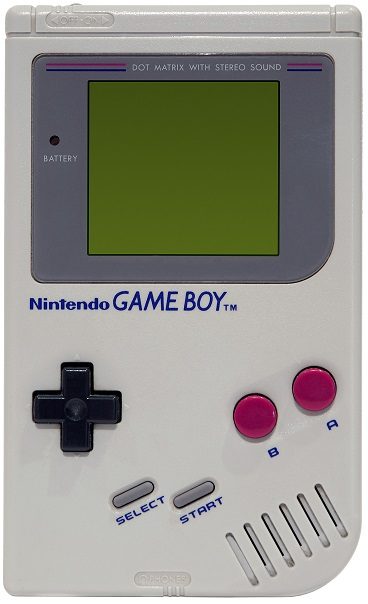 25 years ago today the Game Boy launched in North America. Daaaaaaamn. Show of hands if you still have yours!

::cue rocking chair:: I remember when my very own Game Boy came into my life. It was Christmas morning and I couldn’t have been older than, man, six or seven. (Come to think of it, I was probably even younger.) Anyway, like I said it was Christmas morning and the details are REALLY fuzzy, but as my parents and I were gathered around the artificial tree (mom hates spiders with a fiery passion) my mommy dearest suddenly stood up, picked up a box that seemingly came out of nowhere, and as she handed it to me, said, “Santa told me there’s another present for you in here.”

It was an open and run-down pink box that once served as packaging for a doll that likely required me to change its diapers or some shit. (It was probably called “Baby PoopsHerPants!” and all the girls probably loved her.)

I looked into the box, expecting to see nothing more than blonde, tousled and curly hair indicating the head of a doll but BLAMMO! Within it lurked NOT a diaper-shitting baby, but a Game Boy! Even though I was a bit puzzled as to why Santa would put such awesomeness in a doll box, it mattered not. I. Had. A. Game. Boy.

And I’d take that thing everywhere. Car rides (before my mom introduced me to the concept of motion sickness and ruined me forever, that is), camping, vacations, the bathroom (not even going to deny it) and anywhere else I could take it. Hell, I even carried a purse, and mind you I was still in elementary school, so I could keep my Game Boy within reach at all times.

So, Game Boy, tonight I will raise a glass of something alcoholic and toast to you. Thank you for the wonderful times, memories, and hundreds of dollars I spent on batteries. <3

Pull out your own rocking chair! Share a tale or two about your relationship with the Game Boy. <333